Steve Venick and the Biggest Mitzvah 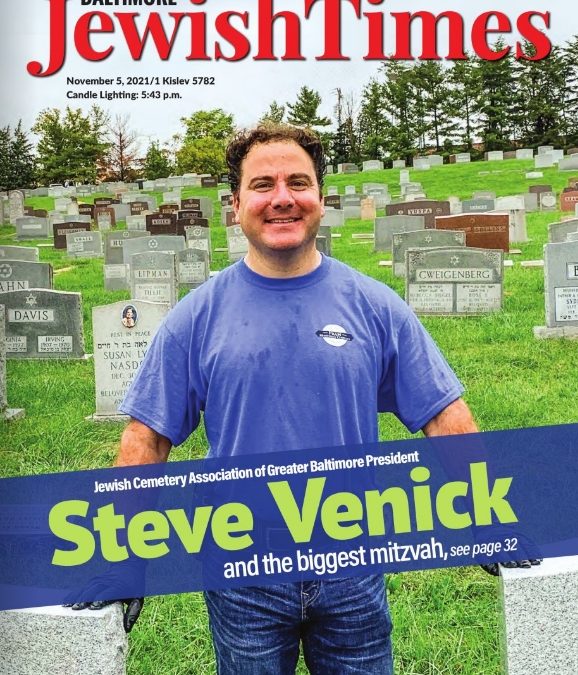 Steve Venick, the president of the Jewish Cemetery Association of Greater Baltimore, first got involved in taking care of Jewish cemeteries at a young age, with the blessing and encouragement of his father.

“My father was involved in cemeteries since I was a young child,” Venick said in an email. “He used to take me with him to sell lots and teach me about the importance of Chesed Shel Emes, taking care of the deceased and how this was one of the biggest mitzvahs in life as you can not be repaid for a kind act by someone who has passed away.

“I never fully understood and appreciated this lesson until I started doing the same work many years later,” Venick continued.

According to Venick, the JCA is a safety net for Jewish cemeteries in the Baltimore area. As president of the organization, Venick’s responsibilities include staying in touch with families looking to purchase cemetery plots, creating maps for visitors looking for their deceased relatives, coordinating the yearly grass cutting schedule and handling other general maintenance issues.

Outside of his work with cemeteries, Venick is a member of Beth Tfiloh Congregation and Suburban Orthodox Congregation Toras Chaim and lives in Pikesville with his wife Holly and three children Jordyn, 17, Hunter, 15, and Marley, 10.

“We are here to help and support those cemeteries in need without proper leadership and resources,” Venick said of the JCA. “Our current mission statement is to provide for the on-going efficient and effective care and leadership of Jewish cemeteries in the Baltimore area.”

JCA of Greater Baltimore first got its start in the late 1990s, when a group of community leaders including Venick came together after recognizing that some of the area’s aging cemeteries needed more care. Initially, the JCA was meant to serve as a type of oversight committee for Jewish cemeteries that could pull resources together while saving money on things like liability insurance and cemetery repairs, Venick said.

Venick was already part of the death care industry as he was serving as president of the Fram Monument Company, which provides headstones and monuments for the deceased. This was in addition to his role as president of the United Hebrew Cemetery Corporation of Rosedale, a nonprofit with a mission similar to that of the JCA’s.

“I saw a natural progression into the JCA where I could use my knowledge, resources and economies of scale to help the JCA be successful,” Venick said.

By the early 2000s, the JCA began to hear more and more from groups of community members who were caring for different aging cemeteries essentially on their own, Venick said.

“The concerns were ‘who will take care of our cemetery after we pass on?’” Venick said. “These groups had no shul or organization behind them. We quickly pivoted our mission statement to get into the role of owning and operating cemeteries.”

Currently, the JCA is an agency of The Associated: Jewish Federation of Baltimore, with a board comprised of around a dozen community volunteers including Venick himself, he said. The majority of them are in some way involved in operating an individual cemetery. The board meets quarterly to discuss problems, the acquisition of new cemeteries, maintenance contracts and other issues. An extra staff person helps with tasks such as bookkeeping and budgeting.

“The JCA takes care of burial arrangements including grave opening and closing, monument foundations and other repairs whenever needed,” Venick explained.

Additionally, the organization has recently partnered with the Jewish Volunteer Connection, Sol Levinson & Bros., Inc. and Fram Monument on initiatives to clean monuments and pick up trash in the cemeteries.

The JCA also has perpetual care trusts for most of its cemeteries, Venick said, which help with maintaining headstones, cutting the grass and performing capital expenses.

Venick explained that cemeteries normally only generate income from new burials. As such, as JCA continues to acquire inactive cemeteries with little or no funding, this inevitably subtracts from their ability to care for other cemeteries, including the ones with a positive cash flow. Because of this, the JCA does a fair amount of fundraising.

To those looking to take part in the care of Jewish resting places, Venick welcomes them to the mission.

“There is no shortage of work to be done in our cemeteries,” Venick said. “We are constantly performing surveys and addressing new issues as they arise. As many headstones as we can straighten, there are always others that are starting to lean and will eventually topple over.

“We are always looking for new volunteers who have an interest in caring for our dearly departed,” Venick said.